It was summer of 2007, and I had just returned to New York from a visit to Pakistan when Lal Masjid and the girls only seminary, Jamia Hafsa resisted fiercely against the heavy artillery and forces of Pakistan. Encircling a TV set, all of my friends were spell-bounded about how did it reach to that point? How did a cleric manage to build the cache of weapons in heavily guarded Islamabad?  The operation Sunrise ended with a body count of 100 hard-core Jihadis and 11 soldiers. Wishful thinking of restoration of Free Speech and Expression elevated.

In the meantime, Pakistan was going through the stigma against the uniformed generals created by the Pakistan People’s Party (PPP). General Musharraf, who salvaged the country from the post 9/11 disastrous ripple-effects, was the chief target of Taliban, Politicians and media houses. Musharraf proved invincible for Taliban, responsible for the dwindling wealth of major politicians and liberalizing media in 2002.

The largest city of Pakistan, Karachi was transforming into a city of the logistical ease with new bridges and infrastructure, Islamabad was progressing with modern salons, and spa and the US dollar was unable to rise against Pak Rupees.

Modernization and Westernization have always been seen as a threat to the status quo long maintained by the Muslim clerics who use religion as a shield to stay in business and keeping women enslaved to continue polygamy. The sky-rocketing high cost of quality education in Pakistan is one of the most compelling reasons for poverty ridden parents to opt for cleric controlled Maderssahs because Pakistan has utterly failed to educate underprivileged masses.

The departure of Musharraf provided enough space for the remnants of Lal Masjid to regroup, reorganize and enter into new alliances with lethal terrorist’s organizations like ISIS and many more break-away Jihadi groups. The succeeding democratic governments led by Asif Zardari (PPP) and Nawaz Sharif (PML-N) pushed the country back to the militancy and politics-for-profit mindset.

A decade later, Lal Masjid is again posing a threat to peace and seculars. Clerics are shutting down cultural shows, entertainment parties, and cinemas. People and notables are being lynched to death, arbitrarily killings are common, and seculars are on the run. During first six months of this year, many private and on campus entertainment, cultural and dance parties have been busted and the participants arrested both by the police and the Islamist – mainly by Islami Jamiat-e-Talaba (IJT).

Not only militancy and clerics, many others also control Pakistan on any given level;

The recent episodes of Shahrukh Jatoi, Pashtoonkhwa Milli Awami Party (PkMAP) lawmaker and the Public Accounts Committee chairman Abdul Majeed Khan Achakzai and the US contractor Raymond Davis expose the rule of another parallel authority in Pakistan, the Police.

In July this year, one of the most notorious gang war members, Uzair Baloch revealed many names of his patrons including the former president of Pakistan and co-chairperson of the Pakistan Peoples Party (PPP), Asif Zardari along with several other political stalwarts of the same party in the courthouse of the South judicial magistrate in his 13-page hand-written confessional statement. All the persons of “interest” never been questioned and remain power brokers in the corridors of the Parliament. Uzair Baloch was used by the PPP to eliminate political opponents. During the police investigation, Uzair Baloch has admitted to murder 197 people and property worth billions of Rupees. The commoners in Pakistan are baffled to see Dr. Asim, Sharjeel Memon, Pir Mazhar-ul-Haq, Manzoor Wasan, Mushtaq Ahmed Raisani and Asif Zardari walk free after being repeatedly and evidently involved in many wrong-doings use political impunity.  He also acknowledged that the Sindh government withdrew his head money ahead of 2013 election to use him against political opponents and facilitate fraudulent voting.

In 2015, a 10-year-old girl Bisma, lost her life in her daddy's arm while he was trying to get to the hospital. The little girl died because the roads were blocked for self-claimed VIP Bilawal Bhutto, and Bisma's father was not allowed by Bilawal's security immediately enough to save his daughter's life. Bilawal is not even an elected legislature, but a relic of sinister hegemony haunting Pakistan for past many decades.

The financial misappropriations of the sitting Prime Minister Nawaz Sharif are bright in the spotlight, but he is defiant and unrepentant to retreat.

Pakistan Tehreek-e-Insaf (PTI) sit-ins caused deaths, damages to the Federal Property and shutting down the capital – they gotten away as nothing happened. In October 2016, Pakistan Army, Lt Col Shahid fell into the ditch and died while Maj Jalal seriously injured because their vehicle could not go head; they were trying to find the way as the roads were blocked due to Imran’s sit ins. In another aggravated political power show of PTI on Committee Chowk Punjab, a 3-day old child tragically died; the leader Imran Khan stayed numb and frenzied to become the Prime Minister – remained unapologetic.

According to the Free and Fair Election Network (FAFEN), Pakistan Tehreek-e-Insaf (PTI) chairman Imran Khan’s attendance in the parliament was just 6% while that of Prime Minister (PM) Nawaz Sharif was only 17% in 2016.

According to the South Asia Terrorism Portal (SATP), 29,638 civilian, security forces and militants have died between 2011 – July 2017 under the infamous PPP and the “Punjab first” PML-N bloody democratic regimes.

Pakistani media has ballooned like Islamic sentiments in Pakistan during past two decades. Unfortunately, the rampant and non-professional reporting standards have deteriorated the political situation with unverified and discredited news rather than serving the interest of people. There is a large and visible rift between urban and rural media, secular and non-secular media and northern and mainstream media. The media houses work as the mouthpieces of the political and religious parties. In a country where poverty is visible and profound, billions of rupees are given away on TV shows – and dare not to question about the source of the money. A newly emerge Bol TV proudly refusing commercial and offering an air-craft in a show in return of the few simple questions. Media fight has turned people as skeptical of media as politicians.

Media remains unable to garner support for free speech and expression fearing the backfire from the militants, judges and the government. Instead, many known journalists and media houses oppose freedom of speech and expression. It is deplorable that the majority of self-styled, self-proclaimed media and journalists support the ongoing onslaught against bloggers, free speech, free expression, blasphemy and net freedom. Non-professional and untrained journalists emerging like the boom of clerics after Afghan war.

There is no authority and representation of people who travel on the killer roads with unexpected potholes and bumps, over crowded transportation and the school buses and scarcity of water. No one is speaking about unemployment and the brain drain.

In-charge of the police stations taken their uniform and position granted and rule over public making this important institution as one of the most distrusted and hated department. Strikes called on the local mosque speakers, or few armed bullies end up with dead bodies and property damages, extortion, street crimes, child labor, honor killings and wall chalking continued unabated.

Poor people have no access or limited access to law, government officials and the parliamentarians they vote for. Politicians are criminally ignoring the deaths and human tragedies sounded just within past few weeks but unfolding for past few decades like missing people and forced conversions predominantly in Thar, Sindh, newborn deaths, in Khyber Pakhtunkhwa (KP) and the largest city of Pakistan, Karachi’s water supply contaminated with human wastes.

Neighborhood bullies connected with politicians and clerics, armed forces, the police, landlords, clerics, individuals with the deepest pockets and extended connections or none of them – Who actually controls Pakistan?

The writer is the daughter of a former diplomat to Pakistan and one of the brains behind FreedomTalk.net​ 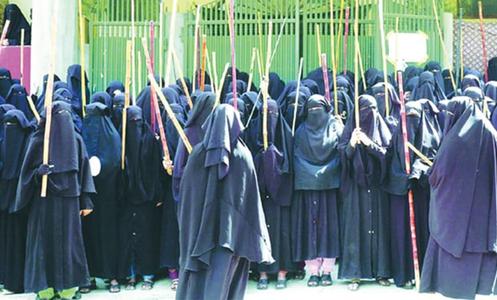