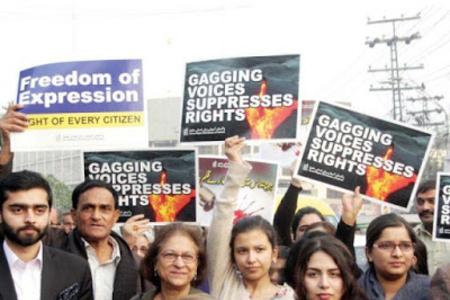 Pakistan’s human rights record, specifically when it comes to civil liberties, is dismal. In next July, the UN Human Rights Committee in Geneva is due to review Pakistan’s performance under International Covenant on Civil and Political Rights. It is the first time since 2010 when Pakistan ratified this UN convention which deals with fundamental rights including freedom of expression, the right to information, assembly, association, privacy, and religion among others. Another important event vis-a-vis human rights will take place in November 2017, again in Geneva, where the UN Human Rights Council will take a holistic review of human rights in Pakistan under its unique instrument — Universal Periodic Review. Several civil society groups and individuals have submitted shadow reports on different thematic areas parallel to the state’s reports for these two reviews. Nonetheless, there has been a progression in human rights violations, but the state staunchly believes that all rights are well protected and promoted according to global standards.

Is it so? A quick review of civil liberties, especially about online expression in Pakistan and how the government is trying to circumcise this freedom rejects its claims. Kicking off with unfortunate abductions of five bloggers and a minority rights activist, 2017 so far has proven perilous for political dissent. At least three of the abducted bloggers were vocal for criticizing military policies, particularly its approach towards combating terrorism. These abductions triggered a wave of intolerance across the country and resulted in the haunting environment to further intimidate questioning voices and those touching upon the tabooed areas. The country witnessed an unprecedented rise in blasphemy cases originating from rapidly growing dangerous online spaces for citizen’s political dissent. The reason was obvious that some ‘unidentified angles’ or so-called ‘cyber troopers’ purportedly associated with ‘holy cows’ painted the bloggers’ abductions as punishment for allegedly committing blasphemy.

Smelling the danger, bloggers’ families had to hold a press conference in Islamabad to dispel the false propaganda and circulated a disclaimer categorically stating that they were Muslims and could not even think of profaning Islam. In Pakistan, insanity always prevailed over wisdom whenever the claim is of religious defilement. And it’s a naked truth that justice to blasphemy accused has always been done extra-judicially in Pakistan, as we witnessed in the case of Mashal Khan more recently. The frequency of cases about online blasphemy in Pakistan has risen in two years’ time. Bytes for All’s monitoring records of one-year (May 2016 to May 2017) contains at least eight cases where blasphemy accusations were leveled against individuals for their online religious expression.

Besides these bloggers, former Governor Punjab Salman Taseer’s son Shaan Taseer was also accused of spreading religious hatred and committing blasphemy on Facebook, when he extended Christmas greetings to Christians. At least two blasphemy accused in recent times belong to Christianity. These included a case of WhatsApp message being circulated in Sarai Alamgir that allegedly carried blasphemous content. Another case merely started with liking the picture of Khana Kaaba on Facebook by a Christian teenager Nabeel Masih of Chak 66 in Bhai Pheru. Other trends include the government’s nondemocratic approach towards law making that aims to restrict and criminalize online expression. An overbroad Prevention of Electronic Crimes Act, 2016 is one of the results. Although the entire law is not problematic, however, it contains several provisions that suggest heightened punishments that do not meet the criteria of necessity and proportionality. Such as the outdated concept of defamation that gradually is being decriminalized by modern democracies to avoid misuse of related laws against journalists, activists or ordinary citizens. In contrast, the PECA suggests a three-year imprisonment or one million rupees fine or both for offenses related to defamation originating from the shrinking cyberspaces.

Similarly, any online expression or content that the state deems ‘unlawful,’ which is a subjective term, will also be removed or censored. Although the government has not officially confirmed, however, sources privy to Pakistan Telecommunication Authority have informed that the authority blocked several websites and pages that published objectionable content using PECA Section 37. Khabaristan Times, a satirical online newspaper, is one of the examples.

An overbroad Prevention of Electronic Crimes Act, 2016 shows government’s non-democratic approach towards legislation. Although the entire law is not problematic, however, it contains several provisions that suggest heightened punishments that do not meet the criteria of necessity and proportionality

The announced ongoing crackdown against ordinary citizens, political workers, and journalists who took to the social media to criticize military on the issue of Dawn Leaks, has rung the alarms within right-wing political parties who earlier had supported the making of such laws aiming at circumcising political dissent. Federal Investigation Agency so far has summoned several political workers of Pakistan Tehreek-e-Insaaf and ruling party, Pakistan Muslim League-Nawaz for criticizing the military.

Still, the list is long and the battleground for next general elections is fast-approaching. Social media was the most effective tool for campaigning and mobilizing people for a vote in 2013 polls. However, this time draconian laws have already been promulgated and practiced, threatening to limit free speech because the state has yet not been acclimatized to democracy where the freedom of expression is the cornerstone of success. And insanity is the word — I dare using for this matter. All is terrorizing, intimidating and daunting. Still, the government is adamant to tighten the noose around its neck, and circumcising the liberty to speak.

The writer, Haroon Baloch is an active advocate for Digital Rights in Pakistan and an affiliate of with Bytes for All. He tweets at @advertbalcha

Published with the permission of the content owner. The article originally published in Daily Times on May 26, 2017.