Parliamentary Secretary for Human Rights, “the legal heirs did not approach the police station for lodging the police report, a committee of the senior police officers has been formed for conducting an impartial investigation.” The official notification shared by Mr. Malhi on his verified Twitter account has the names of the police officers included.​ DEVELOPMENT:  On March 28, 2021, the police in Sukkur city announced the arrest of the prime suspect and two of his accomplices. The police claimed to recover the murder weapon. However, the lawyer representing the deceased journalist said the police are hesitant to arrest the real suspect. April 3, 2021: Upon request of Mr. Dileep Kumar, the father of Mr. Lalwani, the provincial administration of Sindh changed the Investigation Officer (IO) for henceforth investigation.

MEDIA HOUSE CLARIFICATION: "All major allegations — whether 34 years old or recent — against Jang Group have been proven false in the court of law whether in the most prestigious UK court or honorable Pakistan courts, including taking illegal funds from foreign entities, taking funds for political patronage, traitorhood, blasphemy, and tax-related allegations, etc.

Jang Group’s newspapers, channels, reporters, editors, and anchors have experienced shutdowns, been shot at, killed, banned, boycotted, but the Group is still standing and it's efforts to pursue the truth remain, said the spokesperson."

http://www.freedomtalk.net/ take: The incumbents using anti-graft court to target the media houses criticizing the government and resilient against the censorship and adhering to press freedom. Recently, the Herald group (DAWN) group, another resilient media house resisting censorships, filed a petition in the court against the suspension of the government advertisement to financially suppress the media house. In May 2019, a woman, Tayyaba Farooq, had alleged the Chairman National Accountability Bureau (NAB) Javed Iqbal of sexual harassment and Geo News aired footage of the leaked a video https://www.youtube.com/watch?v=aYrd15l3ZP4
In November 2018, the Geo News had also reported about the fake degree of National Accountability Bureau (NAB) Lahore Director General Shahzad Saleem. After more than 200 days behind bars, the Supreme Court of Pakistan granted him bail on November 9, 2020.

POLITICAL PARTIES ATTACKS ON FREEDOM OF SPEECH AND FREEDOM OF EXPRESSION

The Ahmadis are one of the most persecuted communities in Pakistan. A former Prime Minister of Pakistan, Zulfikar Ali Bhutto, has declared Ahmadiyya or

Qadyani as non-Muslim in 1974. Since then, hundreds of the members of the Ahmadiyya community have been killed, thrown in jails, and deprived of

employment opportunities. Tens of thousands have left Pakistan. Since the declaration, the Ahmadiyya community subjected to continuous persecution and

discrimination by the succeeding governments and vigilantes.

​​​FREEDOM OF SPEECH AND FREEDOM OF EXPRESSION UNDER ATTACK ON CAMPUSES 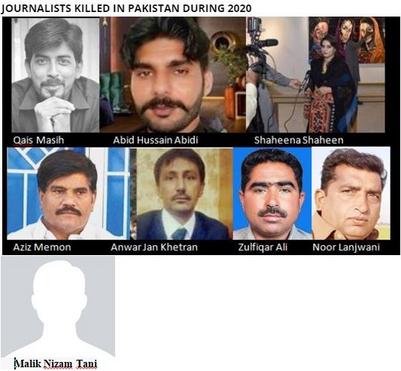 March 2021, unidentified shooters killed Royal News TV and Daily Puchano journalist Ajay Kumar Laalwani in Sukkur, part of the Sindh province. Mr. Laalwani belonged to the minority Hindu community and voiced his concerns over forced marriages, conversions, and rights. He was killed in a barbershop. The police are investigating the motive of the killing. Scroll down for more details

​​http://www.freedomtalk.net/documented killings of eight journalists and 202 violations against Freedom of speech, freedom of expression & press freedom in Pakistan during 2020. SCROLL DOWN FOR TIMELINE: